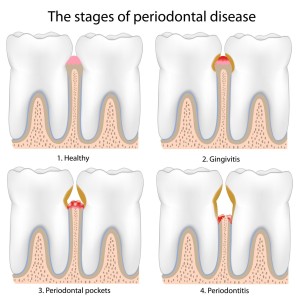 Periodontal disease is the leading cause of tooth loss and is the most commonly disregarded oral threat. Most people tend to think that brushing alone is enough to maintain ideal oral health. On the contrary, it is important to take adequate care of the gums which play a vital role in supporting the teeth in place. Periodontal issues such as swelling and bleeding of the gums are common problems that arise due to various factors, the most prominent of which is improper oral hygiene maintenance techniques. Periodontal disease can be maintained with Periodontal Treatment, depending on the stage of your periodontal disease. Below are two common conditions associated with the gums that can lead up to advanced periodontal disease if it goes untreated or undiagnosed.

Two common conditions associated with the gums are:

Gingivitis: Gingivitis is the inflammation (swelling) of the gums. It represents early stages of periodontal disease and is reversible with the help of regular dental cleaning and care. Small pockets form between the gums and the teeth during this phase and it is important to practice correct brushing and flossing to restore ideal periodontal health.

Periodontitis: Periodontitis is the name given to a progressed stage of gingivitis whereby the depth of the pockets becomes greater and the inflammation worsens. Though according to literature, once the disease reaches this stage, it is deemed irreversible, but there are certain procedures that can help patients halt the further progression of the condition. These include deep scaling and root planning therapies which are performed by experts at Lake Pointe Dental. Both procedures are aimed at removing calculus and bacteria from the root surfaces and areas below the gum line. To ensure that a painless, comfortable treatment for the patients, local anesthesia is generally given prior to the procedure.

In severe cases, it is possible that the condition may not improve even after root planning and scaling. Invasive periodontal surgeries may be required for which the patients can be referred to Periodontists.